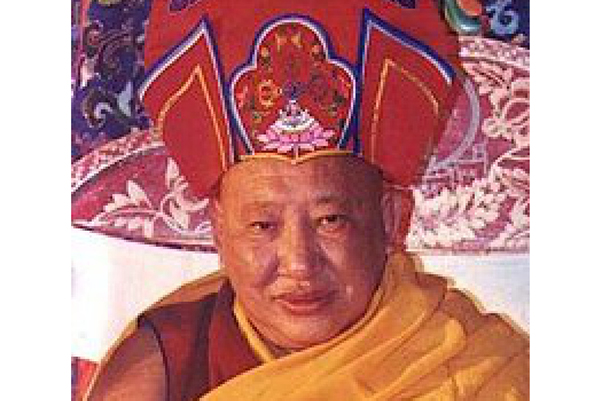 H.E. Taklung Tsetrul Rinpoche (b. 1926) is the head of the Jangter (Northern Treasure) Nyingma Lineage. He is the throne holder of Dorje Drak (Vajra Rock) Monastery. Below is his brief autobiography:

"I was born in the central part of Tibet, near the famous lake called Yardrog where Guru Rinpoche left his handprint, in the Western year 1926. Close to my birthplace, in the region known as Taklung, was the prominent Taklung Tse monastic center affiliated with Thubten Dorje Drak, the seat of the Northern Treasure (Jangter) Nyingma dharma tradition. In the 19th century, the great Khenpo Namkha Longyang from Dorje Drak recognized an ordinary monk from the monastery as the incarnation of Ngok Chöku Dorje. That tulku continued to study and train as an ordinary monk, and eventually became the Vajracarya of the monastery. He devoted his whole life to practice and the attainment of superior realization. It is said that the special protector of Ngok, the glorious goddess Dudsolma, pledged her service to him. His reincarnation also moved up through the ranks of the ordinary monks to become the Acharya but departed for the pure realms at a young age. The ninth Dodrak Rigdzin, Chöwang Nyamnyi Dorje, in accordance with a meditation vision, identified me as the next rebirth.

I arrived at Taklung Tse monastery and received my first ordination when I was five years old, as well as the title and enthronement of a tulku. When I was eight years old I was given my dharma seat at the mother monastery Thubten Dorje Drak. I studied and became proficient in all of the monastic arts and rituals. From the age of fourteen,I studied with a lama named Pawo Rinpoche, who was a student of Khenpo Thubten Gyaltsen, a personal student of the great Dzogchen Khenpo Shenga. When I was fifteen, the elder Khenpo from Gotsa monastery, who was a personal disciple of the previous Dordrak Rigdzin, gave the empowerments and transmissions of the Changter lineage to the current, great Dordrak Rigdzin, Namdrol Gyatso. At that time I most humbly was able to receive most of these empowerments and transmissions, as well as other Dzogchen instructions.

On the occasion of the 2500th anniversary of the Buddha's parinirvana, I went on the pilgrimage to India with my family. Circumstances worsened from year to year in Tibet until it became impossible to remain there; and so, in 1959, some companions and I stole away at night, leaving our homeland, until we reached India, making our way to Sikkim, where I stayed for two years. At Rumtek monastery I received the empowerments and transmissions of the Treasury of Oral Instructions and Kagyu Mantra Treasury from the great 16th Holiness Gyalwa Karmapa. In Kalimpong, I received the entire empowerments and transmissions of the Great Terma Treasury and the Nyingma Kama, as well as some of the dharma treasures of Dudjom Lingpa, from Kyabje Dudjom Rinpoche. In Bhutan, from Dilgo Khyentse Rinpoche I received transmissions for the collected teachings of Mipham Rinpoche, and empowerments and transmissions for the Heart Essence of Longchenpa, and other Dzogchen practices and tantras.

Later I went to a new Tibetan refugee settlement in Shimla, India, where in the years that followed I worked with the community, local and state government officials, and the office of His Holiness the Dalai Lama to found a new Dorje Drak monastic seat in exile, to preserve, foster and expand the teachings of the Jangter lineage, since Thubten Dorje Drak Monastery in Tibet had been completely destroyed. Today there are almost 80 monks there, and several in retreat.

I have offered the Jangter, and other dharma empowerments and transmissions at the direction of prominent lamas of different lineages at various monasteries in Bhutan, India, and Nepal, including Namkhai Nyingpo Rinpoche in Bhutan, Kyabje Penor Rinpoche in Mysore, and Dilgo Khyentse Rinpoche at Shechen monastery in Nepal. Otherwise, I continually give instructions, empowerments or transmissions on the preliminary and main practices, as are suited to the needs of who ever comes to request dharma teachings".