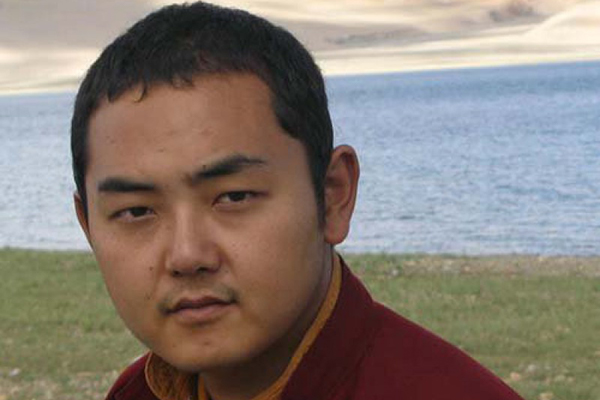 A year after the Eighth Gyalwa Dokhampa passed away, his disciple who was one of his regents, requested His Holiness the Gyalwang Drukpa to look for Khamtrul Rinpoche's reincarnation.

While in retreat in the Hemis Monastery, His Holiness the Gyalwang Drukpa had an experience. In that vision-like and dream-like experience, someone dressed like an Indian sadhu approached His Holiness and said, "I am Khamtrul Rinpoche and I will take rebirth in your family." This particular vision appeared two or three times. Finally, in one of his visions, His Holiness the Gyalwang Drukpa saw Khamtrul Rinpoche, who appeared very poor, old and sick, saying "I have been looking for you but you kept neglecting me."The same morning His Holiness received a letter from a lady requesting for a prayer for her sick baby. Then again His Holiness dreamt of the baby boy who was like a piece of a flesh, fragile and was near the edge of a cliff. His Holiness felt like looking after him but did not, and the baby looked as though he was dying.

His basic studies were done at Druk Sangag Choeling Monastery in Darjeeling. There he spent his childhood and teenaged years under the guidance of his root teacher, His Holiness the Gyalwang Drukpa. His other main teacher was Venerable Omze Sherab, a disciple of Trulshik Pema Chogyel, the enlightened Drukpa yogi who was also the teacher of the Eleventh Gyalwang Drukpa.

Later, His Eminence completed his Masters degree from the prestigious Tango Monastic University in Thimphu, Bhutan which is a nine year course in the Drukpa Order.  His Eminence has studied Buddhism since the age of five when he was officially enthroned.  His Eminence is the author of the book Restful mind – A new way of Thinking.  A new way of Life and has launched the book internationally in Bhutan, France, Great Britain, Singapore, Vietnam, Brazil, Hong Kong amongst others.

His Eminence Gyalwa Dokhampa also teaches worldwide where he brings a young and vibrant viewpoint to traditional Buddhist teachings. Since 2000, he has shared his knowledge and warmth of personality with students in Australia, Mexico, Bhutan, Vietnam, Malaysia, Hongkong, Taiwan, Singapore, Peru and Europe. Like His Holiness the Gyalwang Drukpa, His Eminence emphasizes that Buddhism is not a religion, but rather a way of life to finding happiness. He also works to make Buddhist ideals relevant to a modern lifestyle and emphasizes that Buddhist principles can and should be integrated into everyday life, through service to others.

His Eminence also emphasizes on a balance between individual right and individual responsibility to the society and to the environment.  Like His Holiness Gyalwang Drukpa, His Eminence too encourages preservation of the natural environment by leading pad yatras (walking pilgrimages) to create awareness to the interdependent relationship between the individual and the environment, mindfulness and emotional well being.

As one of the spiritual heirs of His Holiness Gyalwang Drukpa, His Eminence teaches Buddhist philosophy and practices of the Drukpa lineage internationally and spearheads the Drukpa Centers in Australia, Nepal, Singapore, Hong Kong, Malaysia, Vietnam, Taiwan, Peru, Mexico, USA and Brazil amongst others.