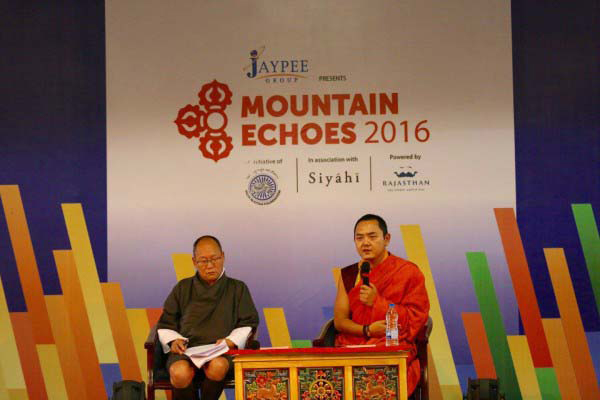 The first day of Mountain Echoes was an extensive discussion filled with intellectually stimulating and thrilling conversations.

It began with Indian ambassador Jaideep Sarkar and the acclaimed Indian writer Amitav Ghosh discussing climate change and the environment along with Amitav Ghosh’s new book titled The Great Derangement: Climate Change and the Unthinkable.

Amitav Ghosh painted a grim picture of the world facing catastrophic events related to climate change. He described climate change as a great weariness that usually don’t get included in novels today.

Amitav Ghosh stressed on the importance of being able to find a way to tell these difficult stories without a human protagonist. Not being able to write a story about climate change is a challenge faced by writers today, he said.

Literature can’t solve the problem of climate change, literature has always prided that it will look into such current issues but instead we are moving further and further away from such engagements, Amitav Ghosh told the audience. “Climate change is happening now and not in the future.”

People who will be worst affected by climate change are the urban middle class, while the poor would know how to survive such dire situations, while the rich would fly off in their helicopters to safer places, Amitav Ghosh said. “Being in Bhutan is an interesting experience. It offers an alternative pattern of resilience to the global pattern.  There’s more  to learn from the country.”

To soothe those distraught by the talk on climate change, His Eminence Gyalwa Dokhampa Jigme Pema Nyinjadh and Dasho Karma Ura reminded the audience that everybody is a ‘Guru’.

Gyalwa Dokhampa Rinpoche described the three wheels of Buddhism and how the quality of Guru differed in each wheel. Yet the fundamental message is transforming and changing one’s mind, which is the most important quality of a Guru, Rinpoche said.

Dasho Karma Ura told the crowd that women are respected in Bhutan and spiritual female practitioners are seen as pure beings in the Vajrayana practice. “The wisdom mind of women are much sharper than men, this was said some 200 years ago by Khandro Yeshey Tshogyel who was the consort of Guru Rinpoche.”

The next session turned out to be a lively session with school children roaring with laughter as Indian novelist Ira Trivedi and Bhutanese writer Monu Tamang talked about dating culture, sexuality and safety of women in the two countries.

Ira Trivedi informed the crowd that in India today, technology is playing an important role for young people eager to meet the opposite sex. However, the fear of rape is still prevalent in India and it is vital to change the mindset of the people, she explained.

READ centre’s Karma Lhazom and an Indian writer Mridula Koshy discussed the important role community libraries play in providing access to information and a safe place to nurture reading. Both concluded that today there are less people involved in literary. They said it should be a collective responsibility to be engaged in the quest to provide literacy to all.

Piyush Pandey described Bhutan as all about purity, pride and  passion  while Ugen Tsechup Dorji stressed on embracing Gross National Happiness’s four pillars towards balanced development. The session ended with the conclusion that branding Bhutan starts from home and from the youth.

Dhamey Tenzing Norgay described his father’s legendary expedition to Mount Everest as a test to push the limit of human endurance. But the expedition his father took some six decades ago has changed in this modern age into a modern past time.

Odd Harald Hauge who has also climbed Mount Everest released his thriller titled Everest this year. He explained that his book is based on how far people will go to reach their dreams. The session ended with a positive note that it’s not too late to climb Mount Everest but also with a warning to not risk their lives.

The afternoon was wrapped up by a talk on Rajasthan and its culture by the Chief Minister of Rajasthan Vasundhara Raje and a performance by Mita Vasisht and Sangita Kathiwala on the poetry of Lal Ded.